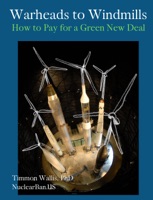 Warheads to Windmills, How to Pay for a Green New Deal Book Details

Warheads to Windmills, How to Pay for a Green New Deal Summary

Our survival as a planet depends on drastically curbing greenhouse gas emissions in the very near future. Our survival also depends on completely eliminating the danger of nuclear weapons.
By fortunate coincidence, the resources (federal funding, private funding, scientific and technical expertise, jobs and infrastructure) currently being wasted on nuclear weapons can be shifted to the production of green technologies to address the climate crisis.
Unless we take swift and decisive action to reduce global carbon emissions, the consequences of climate change will be catastrophic. This is a life-threatening emergency that can only be adequately addressed in the timeframe we have available to us through a profound change in our priorities, as in a “Green New Deal.”
The existence of nuclear weapons is also a life-threatening emergency that threatens all life on this planet, and needs to be addressed with equal urgency. The world has now outlawed these weapons through the 2017 Treaty on the Prohibition of Nuclear Weapons (or “Nuclear Ban Treaty”). It is up to the US to lead the way to their total elimination.
Paying for a Green New Deal is going to require money, skills, jobs, technological innovation and infrastructure on an unprecedented scale. It will also require working much more cooperatively with other countries. Eliminating nuclear weapons will release a huge amount of money, skills, jobs, technological innovation and infrastructure needed for a Green New Deal. And it will also help to transform our relationship with the rest of the world.
And underpinning both of these global emergencies is a third emergency of equal importance: an emergency of spiraling inequality and injustice that makes both nuclear war and uncontrolled climate change both more likely and more dangerous. Unless we simultaneously address the grotesque levels of inequality, both within and between countries, we will not be able to solve the other two global emergencies we face.
That is why the Green New Deal that has been proposed by Massachusetts Senator Markey and New York Representative Ocasio-Cortez is about creating jobs, supporting the poorest and most marginalized communities, and addressing the inequalities and injustices around us as we address climate change.
There are many, many other issues that are also of huge importance right now – and they can be solved, as long as humanity itself survives.
Since the climate and nuclear crises are such profoundly egregious examples of injustice and political corruption, it’s possible that solving them can offer renewed hope, strategies, and energy for solving the epidemic of gun violence; the systemic racism that is not just denying people opportunities but literally killing them; the cycle of terrorism and wars that just breed more terrorism; the injustices suffered because of sexual orientation and gender identification; and the broken systems of health care, immigration, and mass incarceration.
Our survival is not guaranteed. This is the choice before us as we approach the 2020 national election cycle: will the people of this country rise up and demand that we address these three life-threatening emergencies as our absolute top priority?
Nothing we have ever faced in all of human history is as important as what we do now in the face of these global life-threatening emergencies.