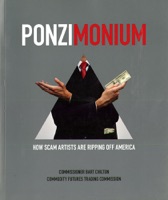 Ponzimonium: How Scam Artists are Ripping Off America Book Details

Get a Copy :
AMAZON ABEBOOKS

Ponzimonium: How Scam Artists are Ripping Off America Summary

Fortunately, more than ever before, con artists are being apprehended and prosecuted.  Federal, state and local law enforcement officials have reported enormous increases in tips and criminal activity since the economic calamity began in 2008.  Cash redemptions are dangerous for Ponzi schemes, because when the money runs out, folks start talking.  For example, at any one time, enforcement staff at the U.S. Commodity Futures Trading Commission (CFTC) are investigating anywhere between 750 and 1,000 individuals or entities for various violations of the law.  Increases in tips and fraud cases have also occurred at the U.S. Securities and Exchange Commission (SEC), at the Federal Bureau of Investigation (FBI), in the states, and various localities around the world. The stories in this book are actual CFTC cases stemming from investigations that began with the economic downturn. These are real cases, real fraudsters, with unfortunately . . . very real victims.  While, the fundamental nature of the writing in such files is, as you would imagine, very bureaucratic:  this script is anything but bureaucratic.

Commissioner Chilton has worked in public service for over a quarter of a century and has found that one of the most important things that can be done is to make government less puzzling and perplexing, less mysterious, and yes, less bureaucratic.  While Commissioner Chilton can’t say there has been any monumental change in how folks see their government, over the years, Commissioner Chilton continues to try and do his part by communicating in a way that lets folks “in” on what is going on.  This writing is an effort to continue that work.  Commissioner Chilton hopes it will be a satisfying read, but more importantly, maybe some folks will avoid the tremendous tragedy that so many of our fellow citizens have endured.