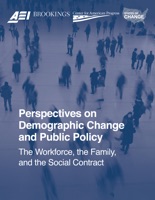 In 2014, scholars from three think tanks in Washington, DC, the American Enterprise Institute (AEI), the Brookings Institution, and the Center for American Progress (CAP), began a bipartisan project titled States of Change: Demographics and Democracy. Generously funded by the William and Flora Hewlett Foundation, the project sought to study America’s demographic change nationally and in all 50 states.

In the project’s first year, a team led by William Frey of Brookings and Ruy Teixeira of CAP produced a report on the nation’s demographic evolution from 1974 through 2060. The report identified 10 key national trends that reveal stunning changes in the demographic landscape that will confront politicians and policymakers in the future. Among them are the rise of “majority-minority” states, the increasing racial diversity of America’s children and senior population, the rise of the post–baby boom generations, the decline of the white working class, and the growth of the white college-educated population. This report confirmed that from almost every angle, our nation’s demographic transformation is occurring faster than expected. The project’s second year used the data to simulate presidential election outcomes from 2016 through 2032. This second report, titled America’s Electoral Future: How Changing Demographics Could Impact Presidential Elections from 2016 to 2032, is also available as an ebook.

Having produced the hard demographic data, the project focused in its second year on its larger goal of addressing the challenges our demographic transformation presents for policymakers and politicians. The researchers invited a group of experts to analyze in six papers possible policy implications of demographic change for the family, the workforce, and the social contract. Two papers, one from the perspective of the left and one from that of the right, were written on each topic. Jared Bernstein of the Center on Budget and Policy Priorities and Henry Olsen of the Ethics & Public Policy Center addressed the workforce. Law Professors Naomi Cahn and June Carbone and Professor of Political Science and Psychology Howard Lavine coauthored one paper on the family, and David Blankenhorn of the Institute for American Values wrote the other, drawing different policy conclusions from the same data. William Galston of the Brookings Institution and Reihan Salam of National Review addressed the broader topic of the social contract from different perspectives. At the project’s second conference, the authors discussed their papers’ conclusions. Their discussion is available for viewing on the AEI, CAP, and Brookings websites.

By compiling each of these papers into a single document, this ebook offers an unprecedented, in-depth analysis of the implications of America’s demographic change for public policy. The essays that follow are the beginning of a bipartisan discussion that we hope—and expect—will continue for years to come.